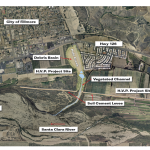 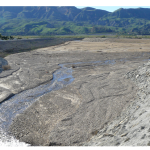 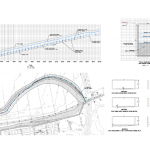 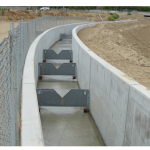 PACE has provided many significant innovations at the confluence of Pole Creek and the Santa Clara River, including a sediment basin and naturalized channel for Pole Creek and a levee and restored riverbank along the Santa Clara River.  PACE designed an in-channel flow-through debris basin for Pole Creek designed to capture 280 acre-foot of debris and provide complete 100-year flood protection for the site and for nearby residents.  Downstream of the debris basin a naturalized creek channel was designed to be a focal point for the development and a corridor for wildlife.  The 280 acre-foot debris basin includes an inlet structure, energy dissipation system and a naturalized earthen channel downstream of the basin.  The hydraulic and sediment transport capabilities of the in-channel debris basin were analyzed using the Fluvial 12 model.  River engineering studies for the project included an assessment of the hydraulic impacts caused by the soil cement levee to the riverine environment of a 2-mile reach of the Santa Clara River.  A combination of soil cement and palisade river training structures were used to provide flood protection for the project and establish a restored riverbank which had been degraded from years of agricultural activity.

The Santa Clara River watershed once supported large runs of southern steelhead into the many tributaries and upper reaches of the watershed.  Due to extensive development, channelization, and watershed “management” measures the population of southern steelhead returning to spawning grounds in the watershed has dramatically reduced.  The sediment basin and channel improvements, while necessary for flood control, may create challenges for endangered Southern Steelhead attempting to ascend or descend Pole Creek.  In an effort to restore the population of the Southern Steelhead in the Santa Clara River watershed a 2,000 feet long fish passage channel was designed for steelhead migration into the upper reaches of the Pole Creek watershed (a tributary of the Santa Clara River).  The fish passage channel featured over 40 baffles designed to mimic the natural riffle and pool sequence ideal for fish passage in both directions.  Designed to meet the guidelines of the National Marine Fisheries Service – Southwest Region for Salmonid Passage at Stream Crossings (Sept 2001) the facility provides suitable salmonid migration conditions for a wide range of flow rates varying from 1 cfs to 40 cfs.  The fish passage channel, scheduled for completion in 2009, is an important step toward restoring steelhead habitat in one of the largest watersheds in Southern California.